Following the smashing first season success of the Netflix Original Series Locke & Key produced by IDW Entertainment, new fans are flocking to join the already massive following for Joe Hill and Gabriel Rodríguez’s beloved horror/fantasy tale. To satisfy demand in the interim before Locke & Key’s second season debut, IDW Publishing is thrilled to announce the next wave of published offerings in the Locke & Key franchise. 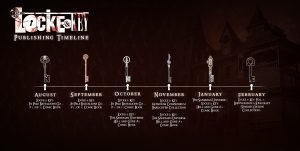 “I always wanted to have my own series character, like Philip Marlowe, Jack Reacher, or Sherlock Holmes. I just somehow never imagined my series character would be… a house. But that house is a home — my creative home,” says Hill. “I’ve spent some of the happiest hours of my life knocking around Keyhouse’s closets, cabinets, and odd corners, hanging there with my artistic compadres, Gabriel Rodríguez, Chris Ryall, and Jay Fotos. We’ve never stopped having fun and I couldn’t be more excited about the stories we’ve got ahead of us. We’re going to do our very best to unlock some good things in 2020.”

“Locks work both ways, so of course the ending of the first Locke & Key epic would lead to new journeys altogether. It’s natural that Joe, Jay, Chris, and I would be eager to explore Keyhouse’s other thrilling and impossible tales,” says Rodríguez. “It’s incredibly rewarding to see the saga of Chamberlin Locke unfold and reach a bombastic ending in the upcoming arcs …In Pale Battalions Go… and Hell and Gone, the latter of which will give us the chance to pay tribute to one of the mythologies that inspired us all to devote our lives to comics — DC’s The Sandman Universe. And even that is only the beginning… so brace yourselves!”

“It’s impressive how Joe and Gabriel keep finding new ways to expand the scope and breadth of Locke & Key, so for that reason alone, I’m happy to be working with them again,” says Chris Ryall, editor of the series. “But really, what I remain most excited about is just the chance to continue working alongside some of the most talented and special people I’ve ever had the good fortune to work with. The great comics to come are just a bonus after that.” 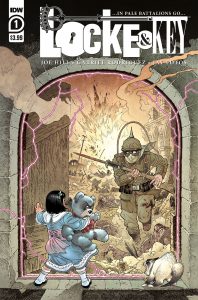 August through October will see the release of the three-part miniseries, Locke & Key: …In Pale Battalions Go…, serving as a lead-in to Hell & Gone, Locke & Key’s hotly anticipated crossover with DC’s The Sandman Universe slated for late fall. Set in the spring of 1915, the story follows John Locke, a patriot too young to enlist in the greatest war of all. He intends to use the impossible, reality-bending keys to turn the tide on the grimmest battlefield of the 20th century… a hellscape whose darkness might even strike fear into an army of shadows.

In October, the Locke & Key – The Sandman Universe: Hell & Gone #0 comic book officially kicks off the crossover fans have been waiting for with a special reintroduction of storylines and characters who populate the fall’s landmark event series. In the reprinted tale “Open the Moon” (originally presented in 2011’s Locke & Key: Guide to the Known Keys), Chamberlin Locke, patriarch of the Locke family, wields the Moon Key to reveal new secrets lurking in Keyhouse… and unlocks a strange new world leading directly into the events of the Hell & Gone series. Also, the #0 issue peels back the curtain on Dream of The Endless with a classic tale reprinted from The Sandman.

Locke & Key: Keyhouse Compendium (isbn 978-1-68405-776-4), scheduled for release in October, collects the original, sprawling tale of magic and family, in one massive 900-page hardcover edition complete with a dust jacket featuring all-new front- and back-cover artwork by series co-creator Gabriel Rodríguez. Marking the first time that the core Locke & Key six-volume series has all been collected into a single tome, the Keyhouse Compendium — much like the doors of Keyhouse itself — transforms all who open its pages. Witness the triumphs and tragedies of Tyler, Kinsey, and Bode Locke from their very first steps on the ancestral grounds of Massachusetts to the climactic final battle with the supernatural entity Dodge.

Finally, IDW welcomes the Locke & Key series into the company’s comprehensive in-house Spanish Language publishing initiative with the release of Locke & Key, Vol. 1: Bienvenidos a Lovecraft (isbn 978-1-68405-782-5) in February 2021. Collecting the six-issue “Welcome to Lovecraft” storyline that introduced the Locke kids and their nemesis Dodge, Bienvenidos a Lovecraft expands the accessibility of Hill and Rodríguez’s storytelling to Spanish-speaking communities throughout the United States, Mexico, and Canada.